They are a perfect blend of authentic tradition and scientific research. Both our doctors have 12 years of intense academic ayurvedia studies which includes graduation, post-graduation and Ph.D. in Ayurveda. Belongs to a traditional family of Ayurveda practitioners running Ayurveda panchakarma and yoga centre in Kerala – the cradle of Ayurveda in south of India.

They are involved in scientific and evidence based researches and clinical trials in the field of Ayurveda. They are well known own for their dedication, compassion and expertise. They inspire and guide to connect back to the healing energy within each patient through holistic approach of yoga and Ayurveda. They have a unique way of helping clients to instil practical Ayurveda in a lucid way. 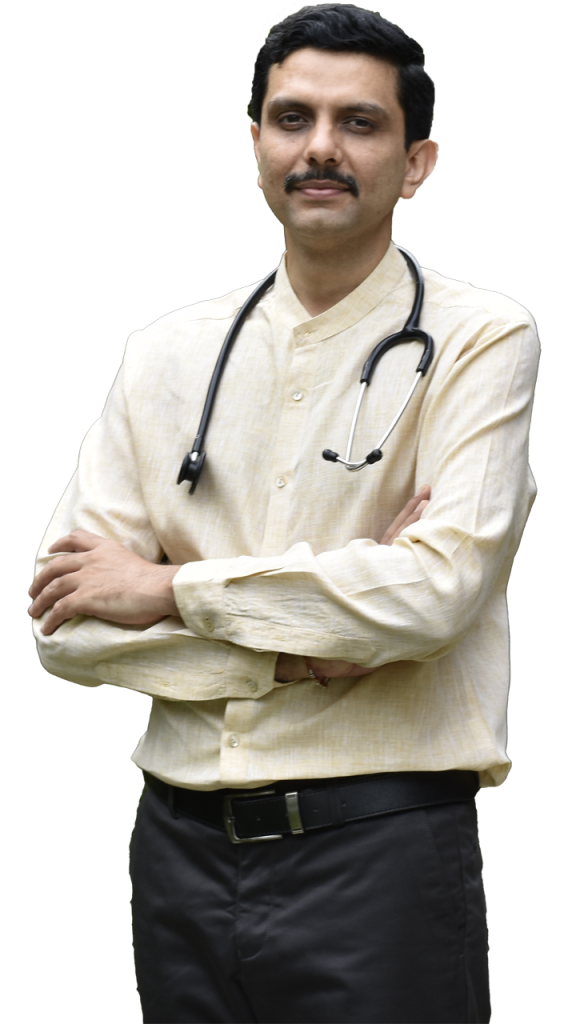 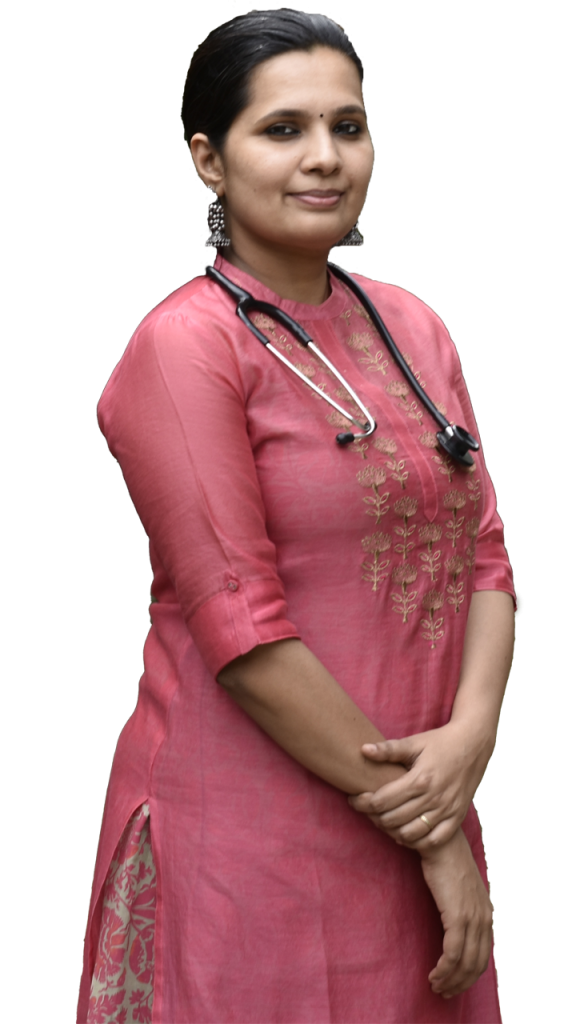 Dr Abhishek Joshi was born and raised in an Indian family where Ayurveda was in daily practice. Born in a place which is much revered as a holy and spiritual place in the western part of India he had imbibed the powerful spiritual vibes right from his childhood. The practice of yoga and meditation was instilled at a tender age in his life by his mother who is a yoga teacher at the local school in India. She used to manage minor ailments at home with kitchen herbs which sowed the seeds and inspired Dr. Joshi to further dive deeper into the scientific exploration of the holistic sciences.

His keen interest in yoga and meditation was also very much alive and he became a skilled Meditation & Yoga teacher at age of 26 years. He is involved with NGO, Art of Living Foundation, which impacts lives of millions of people around the globe across many countries. Dr. Joshi has taken Art of Living happiness programs for participants from 12+ countries.

He practiced and taught Ayurveda and yoga at a traditional Ayurveda hospital in Kerala, India for a year when he got a call from his university vice-chancellor to take up the task of spreading Ayurveda to other parts of the world. He was appointed as Chair of Ayurveda at young age of 31 years in a 53-year-old university in Bali, Indonesia.

His deep interests in Yoga continued and he became a certified yoga instructor by pursuing an official YIC degree from esteemed S-VYASA (Swami Vivekananda Yoga Anusandhana Samsthana) university, Bangalore. He was keen on combining Yoga as a therapy for his patients to heal them better. He materialized his dream by obtaining degree of PGDYTD (Post graduate Diploma in Yoga Therapy for Doctors) and becoming certified yoga therapist with S-VYASA, Bangalore

He has presented on Ayurveda at many national and international seminars with his research published in several papers and journals. He is passionate about teaching Ayurveda and is very popular among his students. He has taught and practiced Ayurveda in India and Indonesia. An avid speaker, he has delivered awareness classes on Ayurveda diet and lifestyle on various platforms.

Since 2014 he is at wonderful island of Bali, consulting, and teaching Ayurveda. He is working on introducing Ayurveda education and clinical practice in Bali, Indonesia. He is integrating Ayurveda and the knowledge of ancient Balinese healing “Usada Bali”. With vast clinical experience spreading across clients from 40+ countries he is one of the most insightful practitioner and teacher. He is a perfect combination of authentic knowledge and practical wisdom of Ayurveda and yoga. He consults his clients with traditional Ayurveda principles along with modern scientific approach.

He guides his clients with Ayurveda herbal medicines, diet and lifestyle changes, pranayama, meditations, and therapeutic yoga. All aimed at physical as well as psychological wellbeing of the clients. His passion to help people, easy approach, gentle nature, dedication to the holistic practices and Ayurveda medicines makes him well respected among his students and patients.

INTEREST AND OTHER ACTIVITIES

Dr Aparna was born into a traditional Ayurveda family of Kerala. Ayurveda was incorporated into her life from her younger age and the love for this Ancient holistic science grew up with her. She was blessed to be under the guidance of many luminaries of Ayurveda throughout her academics and clinical career.

She grew up seeing her father Dr. Padmanabhan BAMS, MD (Ayurveda) treating numerous patients successfully over 45 years with the healing touch of Ayurveda. Her father who is a post graduate doctor of Ayurveda runs an Ayurveda Panchakarma Hospital in Kerala, India and was awarded as the best physician by Ayurveda Medical Association of India.

Dr Aparna was presented “Jivaka Award” for her outstanding performance in academics during her graduation in Ayurveda. Her post-graduation research thesis on rejuvenation therapies in Ayurveda was awarded as the best in the college. She did her Ph.D. in Ayurveda from India’s most prestigious and pioneer institute for Ayurveda, Institute of Teaching and Research in Ayurveda (ITRA), Jamnagar, India.

Dr. Aparna is known for her dedication, compassion and commitment towards her science. Becoming an Ayurveda doctor was her destiny and she rightly considers herself fortunate for being instrumental in healing her numerous patients. She strongly believes that body should be supported to heal itself and Ayurveda is the best way through which body’s healing energy is triggered. Dr. Aparna’s field of interest include Mind body medicine, Vedic medical Astrology. She has seen in her practice that an integrated approach of Ayurveda, yoga and Vedic astrology is very important for a complete healing. Her PhD was on the role of yogic practices and Ayurveda medicine in Generalized Anxiety disorder. She has presented papers in many national and international seminars of Ayurveda and has published her research papers in journals. She is dedicated to spread the ancient wisdom of Ayurveda and showcase the real traditional and authentic face of Ayurveda to the world.

She joined as the medical Director at her family run Ayurveda Panchakarma and yoga centre – Purnayoo Arogya Nikethanam, kerala, India from February 2018 and serves the local community through Ayurveda.

She travels and takes retreats to create awareness and spread the healing wisdom of Ayurveda. She offers online and offline consultations, retreats and workshops in more than 40 countries.

INTEREST AND OTHER ACTIVITIES

One of the most important but neglected daily care is tongue hygiene. Ayurveda - the ancient wisdom of health has advised regular tongue hygiene to...

The modern plastic surgery has its roots in the Ancient medical science of Ayurveda. Plastic surgery was very developed In ancient India and modern...

Relevance of Ayurveda in present era

Man is a machine in the present era of modernization and development. There is a cyclonic change in the Human habits since the technological...

Gotu kola is a very commonly used herb in Ayurveda. It is also used as leafy green food in countries like India, Indonesia, Thailand, Srilanka and...
Read All Blog Post

My deepest appreciation for the wonderful talk on “healthy living through Ayurveda” at consulate of India on the occasion of Ayurveda Day.

Dr. Aparna is an amazing doctor, she not only uses her medical knowledge, but she is very intuitive. Dr. Aparna is always open to explore other alternatives to help her patients heal. She makes herself available, so you never feel alone or as if you’re just another patient on her to do list. I had the honor of being treated by Dr. Aparna while in Bali and she really set the bar high for future doctors. I wish there were more doctors like her that made you feel valued and truly cared for.

“I would recommend Ayurveda to everyone, as it cures the ailments at a root level and not just the symptoms.
I found my consultation with Dr Aparna to be invaluable. My long standing acid reflux/heartburn and other issues due to pitta aggravation have significantly come down, very grateful for that!!
Dr Aparna has been amazing help and her simple dietary and lifestyle suggestions have made a huge difference to my health and well-being. She is very knowledgeable and has a genuine interest of patient’s health at her heart. I trust her advice and highly recommend her to anyone who needs the best Ayurvedic treatment.”

Aparna was the lead Ayurvedic doctor during a Panchakarma retreat I attended in Bali. During the retreat she attended me with kindness and an inclusive manner often missing in Western medicine and opened my eyes to the world of Ayurveda; its history, heritage and benefits as an approach to both wellness and healing. All of which added to the benefit I obtained from the retreat and interest I have in continuing to use Ayurveda in my life.

If you are looking for deep authentic Ayurvedic knowledge and a doctor with both wisdom and soul, then Dr Aparna is the one for you. Steeped in knowledge coming down from generations, she effortlessly gets to the root of the problem, and treats it perfectly. Whenever I am feeling out of balance in my physical body, Dr Aparna is my go to person. Thank you Dr Aparna for being you ❤️❤️❤️

I am glad to have the opportunity to meet and get to know Ayurveda Doctor Abhishek Joshi. He is an inspiring person with a genuine care for others and their health. He has a true passion for what he does. I always go to him first for any medical treatments Since I meet him, as we have found his advice, natural Ayurvedic medicine and council to be most effective and supportive. I have seen personal growth and positive changes in my life due to his support and advice. I strongly encourage and recommend his services of Ayurveda for education, health and natural remedies.

I am happy to share my recent experience with ayurvedic treatment. I am 39 year old and the current COVID condition and the consequent work from home situation (sedentary lifestyle) resulted in me losing significant weight with 2-3 months. I was told to test my blood glucose levels (HBA1c) and was shocked to see the levels (~12). To confirm I even rechecked with Fasting and PP and the result correlated with the earlier tests (~250 and ~415 mg/dL). While just a year ago my levels were normal this sudden change of me becoming a diabetic worried me a lot. I knew a lot of people who take allopathic medicines and continue that for life. While I was exploring indigenous/alternative medicines, I did not know whom to contact. I was lucky enough that one of my colleagues referred me to Dr. Aparna.

Dr. Aparna listened to me through video consultation I was advised the next course of action on the diet, lifestyle changes which I needed to make along with ayurvedic medicines. I strictly followed the same and within weeks, I was able to feel the difference. Doctor keeps track of my health regularly and how I feel to adjust the medicines accordingly. Now (less than 2 months since I started the treatment), my levels are back to normal (98 / 107 mg/dl). Many of my friends whom I spoke earlier couldn’t believe that such significant changes can happen within the short span. All these happened even without meeting the doctor face to face. I would highly recommend both ayurvedic treatment methods and Dr. Aparna to anyone who seek my opinion.

Ayurvedic practice in daily life is made easy when you listen to the talks given by Dr. Abhishek Joshi. From self-message to balanced diet to herbal drinks and eating time table. Simple Ayurvedic steps for a healthier life.

I had the privilege to have Dr. Aparna as my doctor during a 28th days Panchakarma. She is very caring, loving, supportive and she actually listens to you. She has an incredible knowledge and provides a lot of information and feedback in such a passionate and humorous way. Essential is, she healed my chronic pains and even after the treatment, she makes herself available to help you. Just the type of doctor everyone needs!

Ayurveda is offering many services. take benefit of one of our services now.

You have Successfully Subscribed!